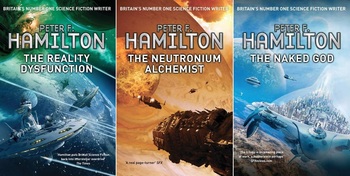 The Night's Dawn trilogy is an epic Space Opera series written by British author Peter F. Hamilton. This Doorstopper of a series was released as three immense novels in Britain; The Reality Dysfunction (1996), The Neutronium Alchemist (1997) and The Naked God (1999). Each volume was broken into two, slightly more manageable books when it was released in the States; The Reality Dysfunction into Emergence and Expansion, The Neutronium Alchemist into Consolidation and Conflict and The Naked God into Flight and Faith. More recent prints in the States have gone back to the three volume format, in all their 1000+ page glory

The story is set in the 27th century, after humanity has developed faster-than-light travel through the use of artificial wormholes. Human society has been divided into two cultures that are more or less at peace with each other: Adamists, who are your typical space-going humans separated and diversified by living on a variety of worlds with different governments, economies and ecosystems, and the Edenists, who have genetically modified themselves to allow universal telepathy between each other, and their biotechnological (or bitek) constructs. Both are loosely bound in The Confederation, which also includes two species of sentient aliens (or xenocs).

Some friction exists between Adamists and Edenists, because Edenism's universal use of the "affinity gene" has led them to cheat death (sort of) by storing their memories and personalities indefinitely in bitek space habitats, and they are socialists who breed synthetic lifeforms instead of building machines. These practices were condemned by the unified Pope and other religious leaders long ago. In addition, due to the versatility of bitek, Edenists maintain a near-complete monopoly on Helium-3, the fusion fuel used everywhere in human space. Adamists, on the other hand, are far closer to the typical human civilization of space opera, making use of mild genetic engineering to cure diseases and relying on nanotechnology implants to link themselves to their technology and each other. Many conversations in the book take place using this form of technological telepathy ("datavising") or the Edenists' form of actual telepathy.

The dense and multi-threaded plot follows too many characters to note here, but runs the gamut from simple, pre-industrial settlers to the obligatory starship captains, through onto kings of interstellar empires and even the sentient bitek minds of orbital habitats. The story concerns humanity's trials and tribulations when... get this: the souls of the dead begin forcefully possessing the bodies of the living. The premise, while fantastic, is actually treated as a natural (albeit poorly understood) phenomenon. As for the novels' SF hardness, space is treated like space while retaining some elements of Space Is an Ocean (like navies and pirates and so forth), and most futuristic technologies are described in believable detail.

This series is so long and far-reaching that it can't help but run flush up against a million and one SF tropes, in most cases smashing through them, or on the other hand, playing them so straight (and cool) that you'll wonder why they never worked as well before.

"You ask," the singularity datavised.