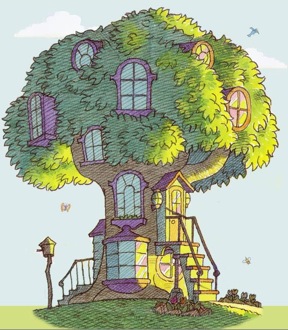 Some characters live in trees. Not in a treehouse, but actually inside a hollow tree trunk. Usually, there will be a doorway in one side of the trunk and a substantial space inside. More elaborate arboreal abodes may have front steps, windows, back doors, and even chimneys visible from the outside. The nicest ones have several fully-furnished rooms inside.

This usually leads to a lot of Fridge Logic if one starts to seriously think about it. How is what's left inside the hollowed-out trunk sturdy enough to support the rest of the tree? How can you fit an entire two-bedroom apartment on the inside of a tree? How are there windows in the upper leaves that should logically only have the thin ends of branches behind them? Don't expect any of these questions to be answered.

The use of this trope often shows that the characters are woodsy or in a nature-based setting. For the trope to be in effect the tree actually has to be converted in some manner to serve as a house. A squirrel living in a hole in a tree doesn't count because that's just what squirrels do.

If you can play through one of those in a video game, then it's a Tree Trunk Tour as well. See also Mushroom House, Treetop Town and Treehouse of Fun.