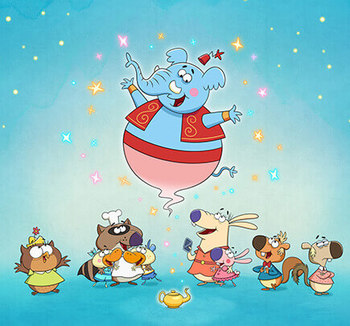 Genius Genie is a Canadian animated series aimed at preschoolers. Created by the independent Montreal-based animation studio ToonDraw and distributed by MarbleMedia, the series airs on CBC and aims to teach children problem-solving skills.

The series is set around around a pond in a forest inhabited by many different animals. The most famous denizen of these woods however is a blue elephant genie who just loves to help the animals solve their everyday problems. Unfortunately, Genie's unique brand of magic tends to exacerbate the problem at hand! The good news however is that always beside Genie are three children - twin 6-year-old ducklings named Lili and Leo, as well as their friend, a 6-year-old rabbit named Penelope. These kids are always happy to help Genie fix his mishaps using teamwork, ingenuity, and creative problem-solving.

Every episode is composed of 5 four-minute shorts.