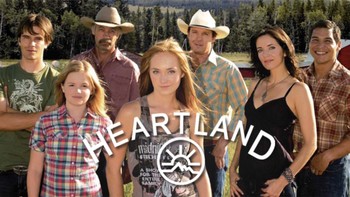 Heartland is a Long Runner TV show, first run in Canada, based on a series of books by Lauren Brooke. It follows the Fleming-Bartlett family that runs Heartland ranch, where "horses learn to heal" after traumatic events or injuries. The older granddaughter Lou takes care of the financial aspects, while her younger sister Amy and their grandfather Jack deal more with the horses themselves, with Amy helping to train them. It is currently the longest-running one-hour scripted drama in Canadian television history at 14 seasons, with a 15th on the way.