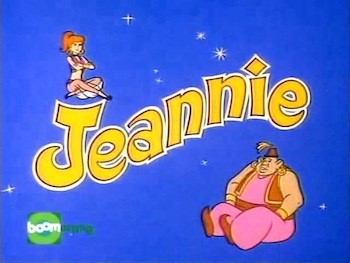 Jeannie was a short-lived Animated Adaptation of I Dream of Jeannie, produced by Hanna-Barbera for CBS. In this incarnation, Jeannie is found by a teenage surfer named Corey Anders, after finding her bottle on the beach. Jeannie fell in love with Corey and stayed with him and to win his love, she tried to help him with his everyday situations. Added to the main cast are Corry's best friend, Henry, and "junior-genie" Babu. The Great Hadji, Master of All Genies, was the only other character to be reused from the live-action series.
Advertisement:

The series has never been released on home video due to conflicts with Screen Gems (and Hanna-Barbera's plans to reuse the "Jeannie" character ended up shelved). The show is primarily known from a Crossover with The New Scooby-Doo Movies. Babu appeared in Laff-A-Lympics (Jeannie herself only appeared in the opening and in a brief cameo in one episode).