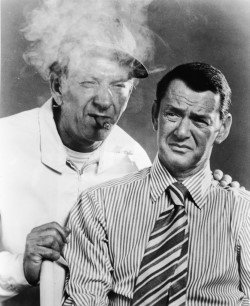 Can two divorced men share an apartment without driving each other crazy?
"What's wrong with policemen on television these days? They're always complete opposites. One's of them fat and poor, the other one's thin and posh. One of them's a woman, the other one's a Martian. One of them has four heads, one of them's allergic to heads."
— Inspector Fowler, The Thin Blue Line
Advertisement:

Mr. Neat/Tidy/Law-Abiding/By-The-Book forced to work/live with Mr. Messy/Slob/Zany/Risk-Taker/Plays-By-His-Own-Rules. Despite the name, they're usually not a romantic couple (though this depends on the show in question).

The original Odd Couple were, in fact, The Odd Couple, a play that became a movie that became a TV series. It featured two divorcees, Neat Freak Felix Unger and his sloppy friend Oscar Madison, having to live together.

See also: Salt and Pepper, Sibling Yin-Yang, Polar Opposite Twins, Tomboy and Girly Girl, Sensitive Guy and Manly Man, Red Oni, Blue Oni, Opposites Attract, Two Gamers on a Couch, Badass and Child Duo, Monster and the Maiden and Gleeful and Grumpy Pairing. Compare Heterosexual Life-Partners. May be part of a Wunza Plot. A movie centered on their relationship is often a Buddy Picture.

If it's not the two main characters, it's an Odd Friendship.