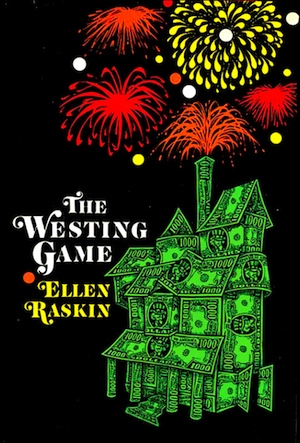 It's not what you have, it's what you don't have that counts.
Advertisement:

A murder-mystery epic Newbery Award winning novel by Ellen Raskin about sixteen heirs who compete to win a $200 million inheritance from the late Samuel W. Westing. Westing, for his own reasons, has set up a game of his own, set in a very large, cushy apartment building where the heirs and their families are basically trapped into staying; the only clues he gives the players are seemingly nonsensical words printed on paper towel squares. Figure out the clues and the answer should be obvious... but maybe not.

Tropes unique to the 1997 TV movie include: