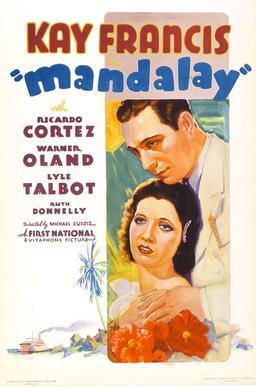 You'll find out that it's easier to make men do what you want them to, than to fall in love and have them make a fool of you.
— Madam Lacalles to Tanya Bodoroff.
Advertisement:

Mandalay is a 1934 pre-Code dramatic film starring Kay Francis, Ricardo Cortez, and Lyle Talbot. It was directed by Michael Curtiz.

Tanya (Francis) is blindingly in love with Tony (Cortez), a sleazeball on the run. To get a shipment of guns paid, he literally sells Tanya into a brothel, and says "chin up."

At the brothel, Tanya loses more than illusions but learns to manipulate men and blackmails herself out of a dire life of prostitution. She embarks on a ship going close to Black Fever country, and on the month-long trip, she meets drunk Dr. Burton (Talbot), and love soon blooms between them. But all is destroyed when Tony sneaks onto the ship and tries to pick things up right where he left them. The problem is that Tanya hates Tony, and she's no longer the bright-eyed kid he left.

You shouldn't mess with the following tropes: