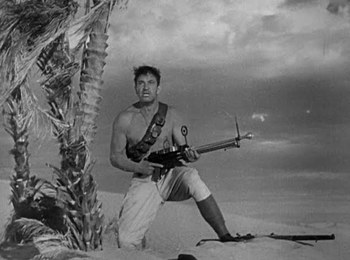 "Come at me!"
Advertisement:

A mounted British patrol manned by Irishmen (this being right before The Irish Revolution) is off on a mission in Mesopotamia during The Great War. Right after the opening credits, the patrol's only officer, a lieutenant, is shot off his horse and killed. Because said lieutenant was also the only one who knew what their mission was, the sergeant (McLaglen), who is now in charge of the 12-man patrol, is at a loss for how to proceed. He elects to head across the desert, making for the river, where the main army is supposed to be. It's a Thirsty Desert, so his men are pretty happy when they find an oasis that has both water, food in the form of date trees, and shelter in the form of an abandoned mosque. But when the unseen Arab enemy that is stalking their patrol makes off with their horses during the night, the oasis becomes a trap, and the men of the patrol are stuck in a grim and hopeless battle with an invisible enemy.

The musical score was composed by Max Steiner. The opening title music was recycled, with a few changes, when Steiner wrote the score for Casablanca.