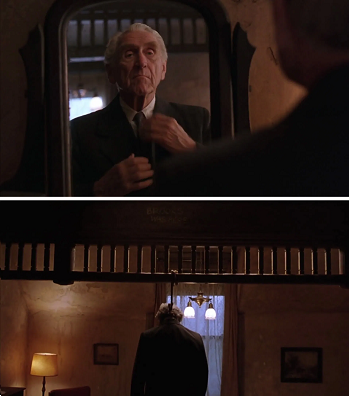 Well...that's one way to hang up your best suit.
"I came for a dress, like I said. But I lied. It was a dress to die in. It matters how things are seen. You make clothes that make the dark bits in me matter. If I'm in this then I will mean something."
— Dahlia, McQueen: or Lee and Beauty
Advertisement:

When a character knows they are going to die — possibly by suicide, execution, going to fight with terrible odds, or a case of Your Days Are Numbered — they may prepare to Face Death with Dignity by laying out clothes or finding a nice outfit to die in.

Sometimes this trope can be used as foreshadowing that a character is going to die, or as The Reveal for why a character was dressed more nicely than normal after they're found.

The show may also use this, giving a character new clothes or a significant clothing change just before they're going to die, even if the character does not do it intentionally, to invoke the trope.

Part of dressing to die, if the death is a suicide, is commonly testing a belt around the knuckles. A common version of this trope is for a former or current member of the military to get out their dress uniform; likewise, those in law enforcement, superheroes, athletes, and others with a similar uniform often will don it before suicide.

Super-Trope to Barefoot Suicide. Often leads to Frozen Fashion Sense when the character was from the past and gets resurrected. In some cases the character might just want to do this to avoid looking ridiculous in the afterlife.

Death Trope, so unmarked spoilers ahead.