Film / The Lost Skeleton of Cadavra 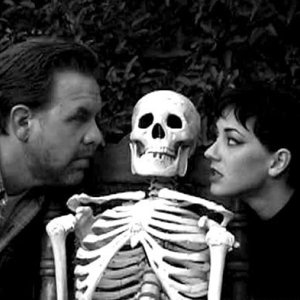 "I sleep now."
Dr. Fleming: Now if you'll excuse me, I've got a skeleton to bring to life!
Skeleton: (in a distant cave) THAT WOULD BE ME.
Advertisement:

The plot revolves around Dr. Paul Armstrong (a man OF SCIENCE), Dr. Roger Fleming (a man OF EVIL), and Kro-Bar and Lattis (aliens FROM OUTER SPACE), all of whom wish to acquire the rare radioactive element "atmosphereum" for various reasons: to do science, to revive a mysterious lost skeleton and to power their spaceship, respectively. A mutant (WHO KILLS FOR KICKS!) and a Beast Man factor in here somehow also.

In 2008 a sequel, The Lost Skeleton Returns Again, was made by Blamire with most of the original cast, this time in the style of a 1960's color cheapie; it was released on DVD in August, 2010.