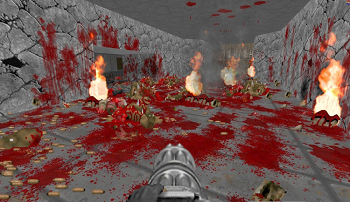 Get a mop... again.
"Disemboweler IV, the game where condemned criminals dig at each other with rusty hooks."
— Bart Simpson, The Simpsons
Advertisement:

Fictional video games on TV tend to be disgusting, ultraviolent messes of blood, guts, and severed limbs as the hypnotized player kills everything that moves, and more than a few things that don't. Many games are about killing everything, of course, but with some style.

Also, the names for these types of video games on TV tend to be rather unimaginative and generic with names such as "ACTION KILLTACULAR DEATHMOWER 5000" or simply "The Decimator", when in real life, they're often much shorter, punchier, sophisticated, and clever, like Doom, Half-Life, Halo, and Quake. In fact, even some of the most controversial games have simple titles, such as Postal. Granted, some ultraviolent Real Life games are named like the trope, but not all. What little frequency there is of such naming, will probably continue to decrease as 1) games try to become taken more seriously in general as a medium, and 2) controversy over the more violent and realistic (or just close-to-home) games continues to mount.

Often just used for name-dropping as a gag. If such a game is shown, it can be an example of Pac-Man Fever (another case of producers not getting it) and/or bear a surprising resemblance to a well-known game.

In a Crime and Punishment Series, these can cause innocent victims to act out the events, possibly including An Aesop about why video games are horrible and teenagers should be watching responsible adults shoot each other on TV instead.

Sometimes the corruption comes not from the violent games, but from the very influence of computers themselves — from the Internet. This is because meddling executives and Moral Guardians on TBN and elsewhere, worrying about the time you spend away from your TV, want to convince you that New Media Are Evil. Very often, if the game is portrayed in a negative light, it can be a case of Do Not Do This Cool Thing for any actual gamers in the audience.

Also, possibly due to Mortal Kombat, Grand Theft Auto, Doom, and Manhunt, virtually every example of this will be a Fighting Game, a Grand Theft Auto clone, or a ridiculously gory shooter of some irrational kind. Occasionally it will be all three at once, with a subtitle declaring "It's For Everyone!".

This is when a game has an overly elaborate and violent title. When a real-world game's content includes over-the-top violence, regardless of its title, that's an example of Rated M for Money and Exploitation Film. Not to be confused with Gory Deadly Overkill Title of Fatal Death, although the name is an example of it. See also Murder Simulators. Contrasts with Ultra Super Happy Cute Baby Fest Farmer 3000, where the game is a really kiddy game.