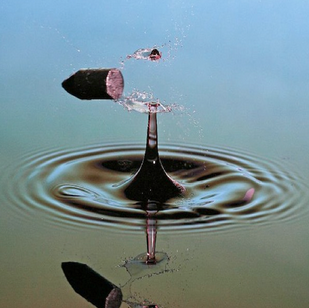 Pretty mundane by this page's standards.
"With this, Talinia could split a hair on your head at 500 yards. Blindfolded."
— Item description of Bow of Destiny, Neopets
Advertisement:

A character picks up a gun, bow, crossbow, throwing-knife, shuriken, or other ranged weapon, and gains Improbable Aiming Skills.

This enables such feats as Blasting It Out of Their Hands, creating a Pinball Projectile, knowing how to Lead the Target from kilometers away, or the Offhand Backshot (the firearm-based answer to the Offhand Backhand), and is in no way dependent on the factual accuracy of the weapons in question. Bizarre and Improbable Ballistics are always employed in some way.

A frequent user of this trope is The Western, where the heroes are often using guns that were, in real life, notoriously inaccurate at anything other than point-blank range, for feats that would make a modern-day sniper with a top-tuned high-tech rifle turn green with envy. It can also be done by a Master Archer, who might emulate Robin Hood by splitting an arrow down the middle. Improbable Aiming Skills is a prerequisite if an archer wants to pull off a Multishot successfully.

In game settings, this can be a natural result of a game simply allowing characters to be that good. If skill improvement is open-ended rather than hitting a Cap at some point, or if caps exist but the maximum allowed by the rules is sufficiently high, a character's raw skill rating (however a specific ruleset expresses it) may end up outweighing situational modifiers enough to make even "improbable" shots pretty much routine. (Depending on the system, of course, this can also quickly lead into Crippling Overspecialization and/or Sacrificed Basic Skill for Awesome Training territory if you're on any sort of character creation/advancement "budget".)

Warning shots might take the form of a Knife Outline or William Telling.

Is sometimes parodied by implying that the shooter meant to do something entirely different and messed up in a spectacularly lucky way.

The Achilles' Heel to someone with this ability is someone who can Dodge the Bullet, although it can be the other way round if the shooter is way more skilled. They tend to have little problem with Human Shield situations, as they're easily able to Shoot the Hostage Taker.

Almost always used by The Gunslinger (or, in fantasy settings, a Master Archer). Contrast with A-Team Firing, More Dakka (which emphasizes quantity over quality, but is sometimes used with this trope), and the Imperial Stormtrooper Marksmanship Academy. May be used to Shoot the Rope. When the computer AI pulls this off, it's The Computer Is a Cheating Bastard. See also Always Accurate Attack, Gun Fu.