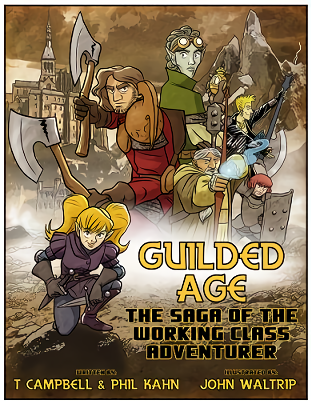 ) is a Heroic Fantasy webcomic, in which six fairly competent adventurers conveniently meet and form a group to make a living of... well... adventuring. It's written by Flo Kahn and T Campbell, with art by Erica Henderson (Chapters 1 through 7) and John Waltrip (Chapter 8 onward). A backup of the comic can be found here

The meat of the story deals with our heroes getting hired to do various jobs for the growing human nation of Gastonia. Gastonia is in the middle of a technological revolution, and its rapid border expansion has earned it much ire from the "savage races," as well as older magical societies, like those of the elves. On top of that, each of the six characters has their own issues to deal with, and as a group the multicultural, multiracial band tends to face as much personal conflict as they do political conflict. At least, that's how it starts...

The first six chapters began with a mini adventure taking place sometime after the main story arc. Word of God says that it was to give the beloved audience the guarantee of a future full of gang-asskicking. The main story arc begins by relating how each of the protagonists met to finally form a party and deliver said asskicking. From the seventh chapter on, however, the storyline has taken on a more linear format.