Give Me Back My Wallet 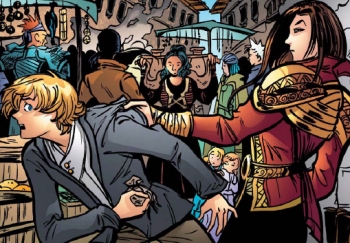 Nice try, kid.
"That's not for you."
— Keeper Artemus to a young Garrett, Thief
Advertisement:

Out of nowhere, a pickpocket runs up and steals something from a character. In a display of street smarts and alertness, the victim immediately apprehends the pickpocket, retrieves his belongings, and lets the pickpocket scurry off in shame. A variation has the pickpocket steal the wallet, and find it contains nothing but a snarky note.

Often done to show that the intended victim was perhaps once a pickpocket himself. Sometimes takes place in a Wretched Hive where almost everyone is a thief of some kind, on top of which, just maybe, There Are No Police.

Another possible scenario is when a thief or former thief is part of the regular cast, and the other character simply demands their wallet back at the appropriate moment — usually implying not that they caught the thief in action, but simply that they find the pickpocket predictable.

See also The Killer Becomes the Killed, Five-Finger Discount and Sticky Fingers. See Mugging the Monster for the supertrope.