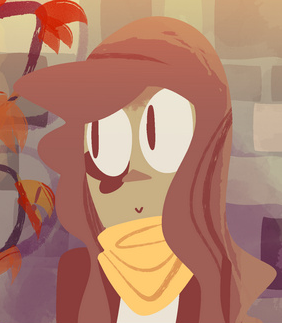 Fenic
"Everyone here has a lot of hurt... but I think it's good that we're all together."
— Fenic
Advertisement:

Goodbye to Halos is a queer fantasy adventure webcomic started in November 2015 by Valerie Halla.

The story's main character, Fenic, is a transgender girl with latent magical powers who was pushed by her father through a portal into another world and abandoned there when she was 15. Lost and hurt, she slowly cut ties with her past and remade her life in the city of Lionsbridge, more precisely in Market Square, where queer, rejected people have gathered and formed a community. However, five years later, when she seems to have finally gotten her life back on track, someone comes looking for her from another world, and she soon realizes she might be connected to a much bigger story than she imagined.

Oh, and most characters have animal ears and tails.

One major focus of the story is exploring human relationships that don't fall into neat categories (for instance, when two people fall somewhere between "friends" and "romantic partners".)

. The author has also written a side story, Animal Girlfriends, which focuses on secondary character Fran and her two partners and which, unlike the comic, contains explicitly sexual scenes. No connection with a certain video game franchise.

Goodbye to Halos contains examples of: