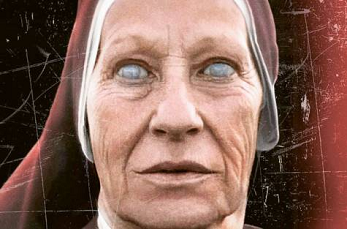 "They have the skirts too of course, so many skirts and veils that you could never hear or see their feet. "Hover Nuns" we used to call them. [...] They're damn spooky."
— John Rodgers, on his time in a Catholic School.
Advertisement:

Nuns follow a spiritual calling, and the word "ghostly" used to be a synonym for "spiritual" (see, for example, Ivanhoe by Sir Walter Scott, and the King James Bible which refers to the Holy Ghost), so maybe this is why nuns in movies are sometimes otherwordly, and seem touched by the supernatural in ways that are frankly disturbing. Other times it's more that the nun's reason for having become one is less about being 'called' than a try at redemption or willing away some horrible trauma in the past.

There is an exception, of course, for when Nuns Are Mikos. Contrast Naughty Nuns. Compare and contrast Nuns Are Funny, Stern Nun, Women's Mysteries, Virgin Power, and Nun Too Holy. For when they're actually villains see Sinister Minister.