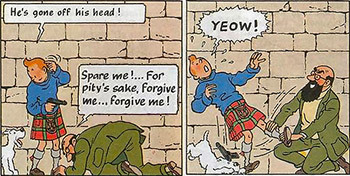 I guess you could say he was pulling Tintin's leg.
"If you cannot win with grace, lose with glory."
— Anonymous
Advertisement:

This trope is used by both villains and badass heroes or Anti Heroes, particularly the loner action-hero kind.

They're cornered. They know it. They surrender. They may even Kneel Before Zod.

Except, when the offer is accepted — surprise! They launch an attack when the opposition drops their guard. This move may let them completely blow away the opposition, or it may only provide enough confusion to allow a timely escape, depending on just how badly taken in the opposition was.

One variation involves the one surrendering intentionally allowing himself to be captured in order to undermine the enemy from within. Often he must rely on The Mole to break him out of his prison, though sometimes he can manage this on his own.

This is the exact opposite of the Graceful Loser. It's also a favorite tactic of the Dirty Coward.

Note that in Real Life warfare, this is a genuine war crime since the Hague Convention (signed before World War I); fake surrenders are "perfidy" because they discourage the opposition from accepting genuine surrenders. In other words, if you don't honor your own surrender, not only does it ensure that the enemy will get you back good and hard next time, but others who are genuine in their intent to surrender may very well find the enemy refusing to accept their pleas out of paranoia (see the Real Life section for how justified such fears are). Similarly, the flag of truce is a protected symbol and its misuse in war is against international law.

Compare Trojan Prisoner, Defensive Feint Trap, Aggressive Negotiations, and I Lied. Wounded Gazelle Gambit is similar, but even more cowardly. See also Playing Possum, Sick Captive Scam (which also relies on faking vulnerability to get the drop on someone), In the Back, and Dirty Coward.

Alternatively, if Falco's not there:
...If this does not work!

Japanese soldiers at Okinawa pretend to surrender, but have something more in store.

Japanese soldiers at Okinawa pretend to surrender, but have something more in store.