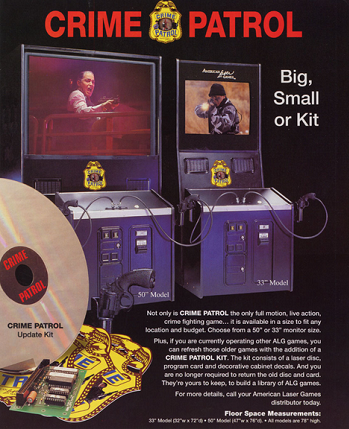 Crime Patrol is one of the many arcade laserdisc Light Gun Games created by American Laser Games after the success of their first such game, Mad Dog McCree. It was published in 1993, and later ported to the 3DO, Sega CD, Sega Saturn and Philips CD-i the same year. It spawned a sequel called Crime Patrol 2: The Drug Wars the following year.
Advertisement:

The Player Character is a police officer whose goal is to shoot every baddie before they shoot you. You'll go through several missions where you'll eventually be promoted from rookie, to undercover, SWAT and Delta Force. As a Rookie, you'll team up with a hammy and reckless policewoman, taking on gang members, robbers and shoplifters. In Undercover, you team up with a slightly overweight male partner and confront cocaine smugglers, stolen car dealers, and crime lords in locations like nightclubs, construction sites and airports. Next, in SWAT, bank robbers, meth dealers, and crack dealers become the enemies. Finally, in Delta Force, you face terrorists who hijack a shipment of nuclear material, hijack a plane, and attempt to assassinate foreign diplomats. Oh, and don't shoot any civilians, even if they're randomly jumping and waving their arms.

Shoot to choose a trope: