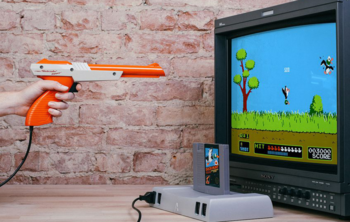 "You play by aiming the gun at the screen, right? That actually seems somewhat realistic."
— Makoto Niijima, Persona 5
Advertisement:

A type of video game where the player uses a pointing device in the shape of a gun to shoot at targets onscreen. In many cases, the targeting sensor is built into the gun itself, and the moving targets light up, instead of the other way around. Most light gun games double as Rail Shooters, in that the player's path is fixed and they can proceed only after all hostiles have been eliminated, although older examples tend to not feature player movement of any kind, making them akin to gallery shooting.

, introduced in 1936. The player's weapon fired a beam of light; if it hit the photosensitive tube mounted on the moving duck-shaped target, a circuit was completed and the player scored. Like many other arcade games, electromechanical light gun games were generally replaced by more versatile, fully electronic models (which used the sensor-gun design mentioned above) during The '70s and Eighties.

The light gun shooter genre is popular in arcades, some of the most popular being Lethal Enforcers, Virtua Cop, and Time Crisis. Console light gun shooters have also popped up from time-to-time, but fell out of favor in the early 2000s with the rise in popularity of First Person Shooters. It should also be noted that many older lightgun games won't work on modern televisions, as the guns relied on the way CRT TV sets refreshed the screen to tell where you were aiming. Instead, current gun games, particularly those in arcades, use infrared sensors tracked by the gun (which is an infrared camera designed to resemble a gun), so that the monitor and the gun aiming are completely independent of each other; this allows for modern gun games to use plasma and LCD screens. The Wii is similar, using a "sensor bar" that is tracked by the Wii Remote to determine the location of the on-screen cursor (if any), making it an affordable platform for native gun games and arcade gun game ports. The PlayStation Move add-on for the PlayStation 3 is also compatible in the same fashion.

Some of these arcade games are technically not light gun games but "joystick gun" games, as the aiming mechanism is actually a joystick firmly mounted on the face of the cabinet, upon which the gun is mounted. This makes holding and aiming the gun as if it were real simply impossible, but makes keeping your aim steady a hell of a lot easier. In Silent Scope, Revolution X, and T2 the gun requires calibration as part of its boot sequence, though this is not true of other "joystick gun" games like the sprite-based Jurassic Park motion seat game. The later 2010's saw a resurgences of mounted light gun games in arcades due to them allowing for faster gameplay plus being cheaper to produce than the plasma screen sensors though there are some occasional instances of the traditional set up.

"You mean you have to use your hands?! That's like a baby's toy!"
Feedback

Resident Evil: The Umbrella Chronicles is a light gun game released in 2007 and set in the continuity of the Resident Evil series. The game consists of four stages ("files") that cover events either depicted or alluded to in Resident Evil 0, Resident Evil, and Resident Evil 3: Nemesis as well as a new storyline set in 2003.

Resident Evil: The Umbrella Chronicles is a light gun game released in 2007 and set in the continuity of the Resident Evil series. The game consists of four stages ("files") that cover events either depicted or alluded to in Resident Evil 0, Resident Evil, and Resident Evil 3: Nemesis as well as a new storyline set in 2003.