Video Game / The Maze Of The Kings 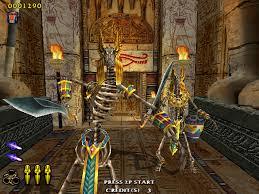 It's like House of the Dead, but with mummies!
Advertisement:

The Maze of the Kings is a 2002 light-gun arcade game made by SEGA. It notably uses the NAOMI system similar to SEGA's famous arcade shooter The House of the Dead. Despite being a light-gun on rail shooter, players actually use a staff control as the game's light gun.

It is set in Egypt where players have to blast mummies, Anubis skeletons, and other monsters on their way through pyramids and mazes.

The Maze of the Kings provides the following tropes: