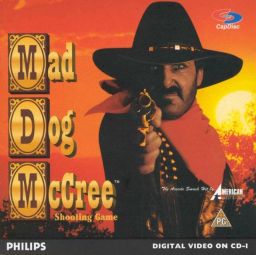 The "Mad Dog" himself.
Howdy stranger! We need your help! Mad Dog McCree's gang have taken over the town. The Mayor and his daughter have been taken hostage up at Mad Dog's hideout and the Sheriff's been locked up in jail, we're gonna have to get him out to help with the gang! Can you handle it? Good...
Advertisement:

Mad Dog McCree is a Light Gun Game that was produced by the company American Laser Games as an arcade game in the year 1990. It has a sequel, Mad Dog II: The Lost Gold; and spiritual sequel, The Last Bounty Hunter. The game is notable for being rendered through Full Motion Video, a novel concept in the early 90s. The game was ported to multiple systems, such as the Sega CD, 3DO Interactive Multiplayer, Philips CD-i, and more recently, the Nintendo Wii, PlayStation 3, and Nintendo 3DS as downloadable extras.

The plot of the game takes place in an unnamed town as well as the suburbs on the outskirts of this town. Mad Dog McCree and his gang of outlaws have taken over the town. The Mayor and his daughter have been taken hostage at Mad Dog's hideout and the Sheriff has been imprisoned in his own Jail. To save the day, you must take the Jail keys from the bandits at the saloon, set the Sheriff free (he doesn't last long in a gun fight), stop a Bank Robbery in progress, clear out a corral of gangsters, and finally leave town to learn the location of Mad Dog's hideout. All of this takes place in gunfight scenes where the player must kill members of Mad Dog's gang before they kill you.

Despite the name, the game has nothing to do with the other one also featuring a Western outlaw (formerly) called McCree.