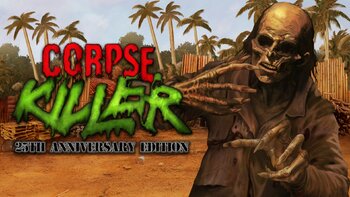 Corpse Killer is a 1995 CD-ROM game produced by Digital Pictures for various platforms and eventually given a remastered edition for the PlayStation 4 and Steam.

Dr. Hellman (Vincent Schiavelli), from the safety of his tropical island, has created an elixir which can raise the dead, and he plans to use it to amass an army of zombies to threaten the world. Players control a nameless Marine who air-drops with some other soldiers in a covert operation to take him out, but the player-character is bitten by a zombie and his comrades are all MIA shortly afterwards. Saved by a Rastafarian named Winston, the pair then save a freelance journalist named Julie who is Going for the Big Scoop and offers information on Hellman in exchange for being escorted on personal errands. Winston, similarly, offers to help the Marine with his mission if he will provide support in Winston's treasure hunting so that he can upgrade from a Jeep to a Hummer, as well as using local datura plants to provide an antidote for the Marine's necrotizing condition.

The game is a less linear than Digital Pictures' traditional output, allowed you to access a map as well as choose how and when to tackle the available missions. But in the end, it's still a Full Motion Video game, which limits the actual gameplay to Shooting Gallery segments, albeit with actual light gun support if you so chose.