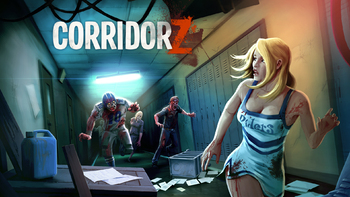 Be quick or be undead.

Corridor Z is an Endless Running Game by Mass Creation.

It all started as just another day at Massville High School. Students were walking the halls, teachers were teaching their lessons, that sort of thing.

Then The Virus hit.

No one knows where it came from, how it all got started, or what caused it to spread. All anyone knows is that, within the hour, the student body was either craving flesh... or mercy. The police couldn't handle the situation, and neither could the National Guard. The only thing they could do was lock down the school to keep the virus contained.

Only three people are left uninfected in the school. Logan the jock, Megan the cheerleader, and Sgt. Williams. Williams claims there's a guarded door the three of them can escape the school through. All they need to do is reach it. And to do that, they need to run like their lives depend on it. Because they do.

The game was released for free on May 3rd, 2016, for Mobile systems. It is also available on Playstation 4, Nintendo Switch, PC, PlayStation Vita, macOS, and Linux. However unlike it's Mobile counterparts these are actually for sale, but they have a few upgrades and added features at the very least.