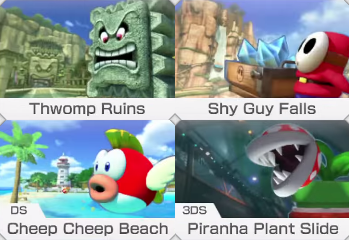 A video game level that highlights a specific enemy type as (usually) the main obstacle or gimmick for the player to overcome.

This naturally means that the place is either crawling with them or that they are powerful enough to deserve your attention. The Mooks in question are likely to be the level's namesake as well (or maybe the level refers to them through a more generic, yet fitting term), but the only real requirement is for the whole concept of the stage to revolve around either their overwhelming presence or whatever unique gameplay aspect they end up introducing.

Since dealing with the same enemy type over and over may become boring fast, one can expect species variants to pop up after a while to keep things fresh (unrelated mooks can also show up, but they will be rarer). Should there be a Boss Battle at the end of the level, it will most definitely feature a King Mook or a Monster Progenitor.

Very often leads to cases of Unique Enemy, as having a mook that is exclusively tied to a certain stage, or at least rarely appearing outside it, helps in making the place stand out from others that might utilize similar environments. However, if the mooks from this level start being carelessly reused in later courses, then they run the risk of becoming Artifact Mooks, especially if the justification for it is weak or non-existent.