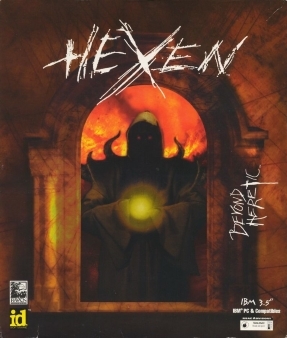 "I'm a shirtless Viking guy and I just punched an entire level to death and a giant flaming skull asked me if I was ready to die and omfg this game is METAL."
— Charlatan

Hexen: Beyond Heretic (stylized as HeXen) is a First-Person Shooter released in 1995 by Raven Software as a sequel to Heretic. It, like Heretic, takes place in a fantasy setting and utilizes the Doom enginenote id Tech 1, incorporating the features of its predecessor (an inventory system, ambient sounds, translucency, freelook, etc.), as well as adding further improvements such as the ability to move sections of the level horizontally (as opposed to the strictly vertical movement of Doom and Heretic), as well as a Hub Level system, allowing the player to move between levels.

In addition to various engine tweaks, it utilizes a class system that allows the player to choose between three different characters: Baratus the Fighter, Daedolon the Mage, and Parias the Cleric, each with their own weapons, strengths, weaknesses and item functions.

The game chronicles the quest of one (or more) of the characters to find and defeat the Serpent Rider Korax, partner of Heretic's D'Sparil and current ruler of your character's home dimension. The manual provides a bit of backstory detailing who the Serpent Riders are, how Korax conquered nearly all of the world, just how the Warrior, Mage and Cleric came to be the last warrior, cleric and mage free from Korax's influence and how one of them would end up becoming separated from the other two, forcing them to do on their own what they had little hope of doing together, but all you really need to know is that you need to kill Korax, and the only thing that stands between you and the most dangerous arch-demon your world has ever seen is his army of giant fire-breathing serpents, centaurs, gargoyles and gods only know what else, all of whom inhabit a series of trap-filled caves, castles, swamps and dungeons. Oh, and the triumvirate of rulers that controlled every aspect of society, who are now under Korax's influence and wield artifact weapons of unimaginable power.

You know, business as usual.

Shortly thereafter Deathkings of the Dark Citadel was released, an Expansion Pack that picks up where Hexen left off: the three characters have been transported to the Realm of the Dead, and must now lay siege to the eponymous Citadel of the Death Kings in order to return to the world of the living.

Two years after that Raven released Hexen II, which uses a modified version of the Quake engine. Set in the world of Thyrion, Hexen II pits four new characters - the Paladin, the Crusader, the Necromancer and the Assassin - against Eidolon, the last of the Serpent Riders, and his four generals. In addition to the aforementioned features of the first Hexen, the sequel added unique abilities, a level-up system and sundry other technical features to the engine.

Following this was the Portal of Praevus mission pack: an unnatural winter has set in, and rumors begin circulating about a sorcerer using wild magic to reclaim the souls of the three Serpent Riders to do his bidding, effectively becoming the supreme power in the universe and requiring him to be put down with all due haste. Still featuring the four curiously depowered characters from the original game, Portal of Praevus introduces a fifth character, the Demoness, who's less interested in saving the world alongside the original four classes and more interested in reclaiming the soul of her former master Eidolon so it can rest in peace.

Whilst nowhere near as extensive as Doom's, Hexen has a very lively and dedicated modding community. Probably the most well known mod being Wrath Of Cronos, an extensive mod which adds in two new weapons and skill trees for each class, new monsters, and three new classes (The Necromancer and Assassin from Hexen II, as well as the Hunter).

Like the first Heretic, the two Hexen games are on Steam (Hexen

) along with Deathkings of the Dark Citadel (Steam

). Portal of Praevus hasn't been rereleased digitally as of yet.