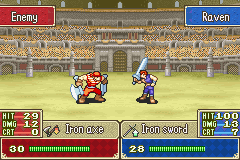 Arena, often in the first or second big city visitable, where the party can fight slightly more advanced monsters at their leisure. To make the fights more challenging, certain unique parameters are sometimes added to the battle requirements (beat opponent in X seconds, cannot use special commands, etc.). The game usually forces the player to try their hand at it once. In theory, many games allow you to play as many battles as you want, although some are extremely difficult until much later in the game... unless you have a Disc-One Nuke.

As such an area could be prone to Level Grinding, some games do not give experience in this place, although you might still earn items, an Evolving Attack, or a Limit Break this way. It also regularly houses a game's Superboss. Of course, some games include it specifically as a place to level grind.

Sometimes this is taken in a completely different direction - the monster arena is actually an "arena for monsters"; in other words, your party doesn't fight in there - instead, a group of monsters allied to you does the fighting. Whether or not you have direct control over them varies with the game.

A popular area for the Inevitable Tournament. If this is completely optional, expect to find yourself getting Sidetracked by the Gold Saucer.