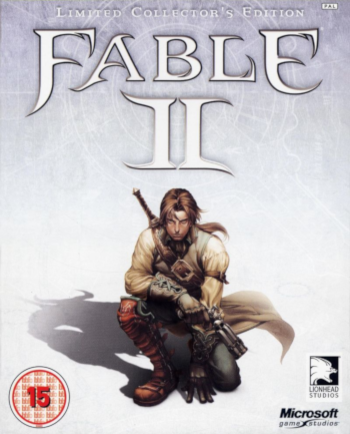 "Welcome child. Your story is waiting. The world that was has changed and grown. So will you. Choose your fortune."
— Theresa
Advertisement:

The second game in the Fable series. This game follows the Hero of Bowerstone as he seeks to prevent Lord Lucien from destroying the land of Albion with an ancient artifact known as the Spire.

The story begins on a cold evening in Bowerstone. The young "Sparrow" and their older sister, Rose, are doing their best to get by on the streets dreaming of a life in Castle Fairfax. Their day is interrupted by a travelling salesman claiming to be selling all manner of magical items. Despite Rose's cynicism, a mysterious woman named Theresa approaches them, convincing them that the musical box is in fact genuine. The two set about raising the coin and purchasing the musical box.

Using it to wish for a life in the castle, they quickly find themselves brought before its current owner, Lord Lucien himself. Just when it seems their dreams are coming true, Lucien suddenly turns his gun on the duo, believing one of them is the hero destined to stand in his way. He coldly kills Rose and proceeds to shoot her sibling out of the castle tower to their apparent doom.

But heroes are hard to kill and the youngster survives. The child grows to adulthood armed with a new purpose in life - stopping Lucien and saving Albion from certain destruction.

After cutting off his connection to the Spire, Lucien insists that it is not over, giving you (or Reaver) a chance to kill him.

After cutting off his connection to the Spire, Lucien insists that it is not over, giving you (or Reaver) a chance to kill him.