open/close all folders
The Hero of Bowerstone

Sparrow / The Hero of Bowerstone 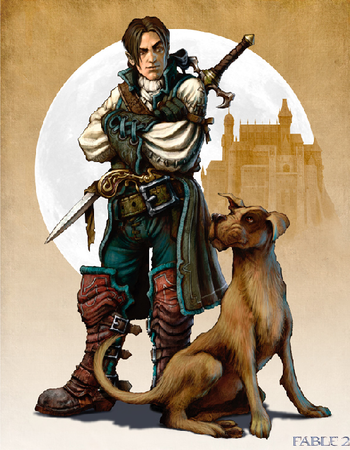 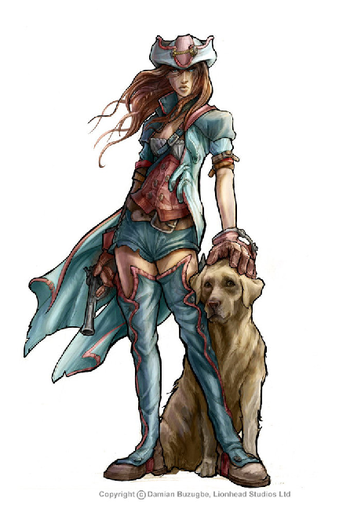 Female Hero
The Player Character, a street urchin who, after losing his/her beloved sister Rose to Lord Lucien, determined to get revenge against him. Helping along with this is the fact that s/he is the Fourth Hero who is destined to stop Lucien.

The Hero of Bowerstone's older sister.

The Hero of Bowerstone's dog, who loyally follows her/him from the day s/he saved the animal from a pack of cruel boys. 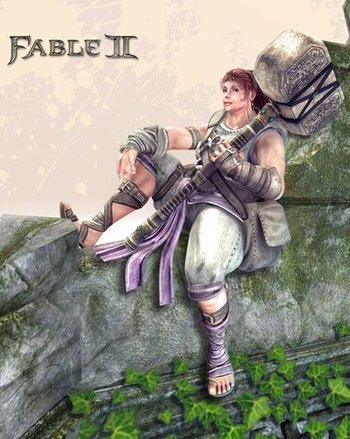 Voiced by: Julia Sawalha
I'm sorry, Father. Not that I broke my vow. I'm sorry I didn't break it sooner. I never did fit in at this place. We both knew that. And now I'm making a new vow...Lucien will die for what he did to you. I won't break this one.

The Hero of Strength, the daughter of the Abbot who presides over the Temple of Light. Although initially a pacifist, after her father is killed by Lucien's men, she resolves to join the Hero of Bowerstone in their quest for vengeance and becomes an ally through the rest of the game. 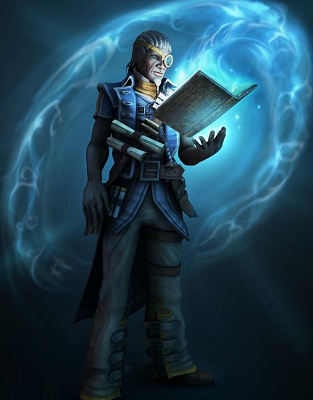 The Hero of Will. He's an expert on the Old Kingdom and a scholar. Although originally working to help Lucien recover the Spire, his interest was purely academic and he dissolved their partnership when he learned of Lucien's true intentions; he later becomes an ally of the Hero of Bowerstone.

Villains and Allies (If Sparrow is evil)

The main antagonist of the game. After his wife and daughter's deaths, he never truly recovers and becomes obsessed with rebuilding the Spire, a conduit from the Old Kingdom that could grant his wish to bring them back. As time goes on, his ambitions take over and he decides to redo the whole world.

Lucien's right-hand man, a result of experimentation with the Shards.

The leader of the Temple of Shadows.

A bandit whom the Hero of Bowerstone encounters early in their journey, kidnapping slaves to give to Lucien.

A Bandit who is especially quick.

A Bandit after Farmer Giles for knowing his dark secret, who continually tries to kill him. Previous to the quest "Cold Comfort Farmer," he kills Giles' wife.

An inanimate Shard that transports large amounts of Mooks to your Hero and destroys Reaver's getaway ship near the end of the game.
Other Characters and Allies (If Sparrow is good)

An entrepreneur who continually tries to raise money and convince the Hero to invest in his ventures.

A former town guard turned farmer who is attacked by the bandit Ripper, resulting in the death of his wife. He requests the help of the Hero of Bowerstone to bring him to justice in the quest "Cold Comfort Farmer."

A member of the Spire Guard who joins with the Hero during their infiltration. Despite working with Lucien, he's a fairly decent guy who only wanted to provide for his wife.