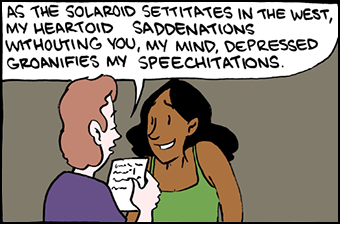 Walking the thin line between this trope and plain aphasia.
Douglas Klump: The perimeters of our assignment were described to us with specificity, Mr. Shlubb. We are to deposit our cargo into the body of water which we now overlook. It was likeways made clear to us that any embellishments of said perimeters would not be advisory.Translation They told us to dump the body. Just stick to the plan.
Burt Shlubb: I cannot prescribe to such a narrow interpretation of the perimeters which you now invoke, Mr. Klump.Translation No.
— Sin City: Fat Man and Little Boy
Advertisement:

Delusions of Eloquence occur when a person tries too hard to sound "educated" by using Big Words or carefully chosen phrases, but gets it wrong, filling their dialogue with malapropisms, mispronunciations, and mangled grammar. The result is that they sound less educated and at the same time a pompous and pretentious attention seeker.

In fiction, this habit can be used to set up a character as a stuffed shirt who demands respect but is mocked behind his back or to add charm or humor to a character who would otherwise seem a little flat. Unfortunately, it is sometimes a case of Truth in Television, as there really are people who do this.

Note, this trope works better in print. Characters with Delusions of Eloquence are really funny in the comics, where you can look at the talk bubbles and see, in black and white, what they are doing to our mother tongue. In a film, they just come across as two mooks who talk too much. ("Low-rent thugs with delusions of eloquence," as Hartigan puts it).

This delusion is often associated with a Know-Nothing Know-It-All or Fake Brits. Compare Buffy Speak, where the ideas may be legitimately sophisticated, but the speaker lacks the ability to properly articulate them, Malaproper, where the character may misuse words completely by accident, and Technobabble, where the words may have no meaning at all. Contrast Spock Speak and Sesquipedalian Loquaciousness, where the big words and proper grammar are used correctly, but for differing reasons. See also You Keep Using That Word, for the most often misused words. When used in written media, this can overlap with Rouge Angles of Satin. And finally, contrast Sophisticated as Hell, where the user combines more down-to-earth language with Big Words.

No Real Life Examples, Please! This exists, but this site does not seek to be judgmental and insulting towards people.

open/close all folders
Anime & Manga
Comic Books
Comic Strips
Fan Works
Films — Live-Action
Literature
"Using a word almost correctly, or using a word almost exactly like the right word, amounts to almost speaking English. You may think that the occasional slip-up won’t matter; but the language you choose is the clothing in which your novel is draped, and saying “incredulous” when you mean “incredible” is the prose equivalent of walking into a meeting wearing your underwear on the outside."
Live-Action TV
Music
Radio
Theater
Video Games
Web Animation
Webcomics
Web Original
Western Animation
Feedback

Thugs in back alleys shouldn't try to use big words like "compensatory" or "recompense."

Thugs in back alleys shouldn't try to use big words like "compensatory" or "recompense."