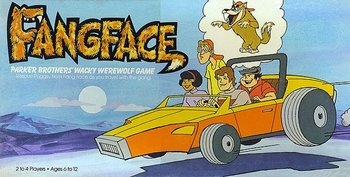 Glistening white triangular tooth
Open up a can of tomato juice
— They Might Be Giants, "I've Got a Fang" (reportedly inspired by this show note  Probably specifically in reference to a scene in "The Invisible Menace Mix-Up", although it was actually a can of red paint)
Advertisement:

One of the first regular series from Ruby-Spears, debuting in 1978. Following in the formula of Scooby-Doo (which, while created by Ruby and Spears, was not a product of their production company), Fangface features four teenagers — Kim, Biff, Puggsy and Sherman "Fangs" Fangsworth, who drive around in their convertible called the Wolf-Buggy, solving mysteries which frequently involve mad scientists, aliens, monsters, and outlandish crimes.

The big twist is that Fangs is a werewolf, who will transform into "Fangface" whenever he sees the moon. Or a picture of the moon. Or something that looks kinda like the moon. Luckily, all he needs to see is the sun (or something resembling it) to change him back. Of course, having a werewolf on your mystery-solving team has its advantages (he's often referred to as a "secret weapon"), and the team keep photos of the sun and moon on hand to initiate Fangs' Transformation Sequence as necessary. Fangface is stronger, faster, and better in a fight — although he has the bad habit of trying to eat Puggsy, especially when he hears any reference to food. In his human form, naturally, he has no idea about any of this, and is frequently confused to find himself in a situation he has no memory of getting into.

Also, unlike on Scooby Doo, all the monsters were real.

In 1979, the second season, titled Fangface and Fangpuss, aired as a segment on The Plastic Man Comedy/Adventure Show and introduced a new character: Baby Fangs, Fangs' infant cousin who turns into a baby werewolf called Fangpuss (which contradicts the opening narration stating that only one werewolf is born into the family every 400 years, unless Baby Fangs' lycanthropy comes from another source entirely). The show remained in the same mystery-adventure style as the first season, but episodes were now shortened to 15-minute segments. Sixteen episodes of Fangface and Fangpuss were produced for the 1979-80 season. The episodes "The Creepy Goon from the Spooky Lagoon" and "Dr. Lupiter and the Thing from Jupiter" are the only season two episodes in which Baby Fangs/Fangpuss did not make an appearance.

Fangface and Fangpuss ran on ABC from September 22, 1979, to September 27, 1980; it then became a separate series in 1981 and, like the original Fangface, ran for just one season. After this series, Fangface and company faded into obscurity until reruns began to air on Cartoon Network and Boomerang. There has yet to be a proper release on home media or streaming services, but you can find the entire run of the show on this

Has a characters page!