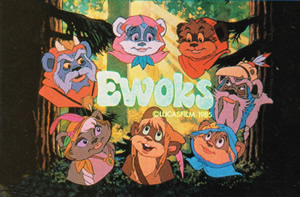 A Star Wars Legends animated series from Nelvana for ABC featuring the furry teddy-bear-like upright aliens inhabiting the forest moon of Endor, from Star Wars: Return of the Jedi, Ewoks lasted for two seasons and was more popular in Europe than in North America. The show was centered around Wicket W. Warrick, the Ewok who befriended princess Leia Organa when she fell off the speeder in Return of theJedi, his family and his closest friends: the future chieftainess Princess Kneesaa, his slightly older best friend and medicine man Logray's apprentice, Teebo and the flute-playing princess' best friend, Latara.

The first season of the show featured rich and detailed animation combined with well-crafted storylines, while the second season featured many changes to make the show appealing to younger audiences; some characters were reduced to background cameos, some others exaggerated.

The plot would usually involve a scheme to destroy the Ewok village coming from one of the antagonist characters or a trip to another location, involving different species found on the forest moon.

The show was paired with another Star Wars-based show, Droids, in its first season, then aired solo as The All-New Ewoks for its second season.

The full series premiered on Disney+ on April 2nd, 2021, under the Star Wars Vintage label.