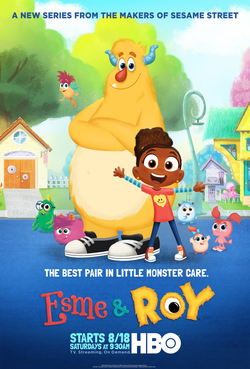 A Canadian-American preschool-oriented cartoon produced by HBO, Nelvana, and Sesame Workshop, the people who made Sesame Street, Esme & Roy follows our titular main characters—a little girl and a monster—who help take care of all kinds of interesting creatures when their regular guardians need aid.

On October 29, 2019, it was revealed that it would begin airing on HBO Max for future seasons, with delayed PBS airings, much like Sesame Street. Episodes are also made available on PBS's website / video app service. However, it left PBS in July 2021, releasing exclusively on HBO Max and running on Cartoonito.

Snugs is scared by loud thunder. It causes him to inflate in size.

Snugs is scared by loud thunder. It causes him to inflate in size.