I Can't Hear You 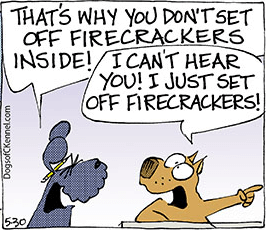 Mrs. Thimble: Mr. Mouseling, you said I'll let you know if the music is too loud! Well, it is!
Mr. Mouseling: What? I can't hear you. The music's too loud.
— Angelina Ballerina: The Next Steps, "Angelina and the New Music Store"
Advertisement:

A conversation is impeded for some reason by either a lot of ambient noise, hearing problems, an unusual obstruction in the ear of one of the conversants, or a terrible phone connection.

So one person yells something. And the other person, auditorially impeded, yells back, resulting in:

A common variation is to invoke the trope. One of the people in the conversation really doesn't want to have the conversation and is grateful for the noise making it impossible to talk and understand each other

This is also a stock phrase for the Drill Sergeant Nasty, in whose case it doesn't literally denote lack of hearing, but rather "You need to call me 'sir' when you say that." Also not to be confused for when someone shouts this as a means of trying to draw more energy from a cheering crowd, like at a concert or sporting event.

Sub-Trope of Impeded Communication and Opposite Trope to Acoustic License. Related to Fake Static for transmitted conversations, Ear Trumpet for a specific gag regarding the hard of hearing, and Mondegreen Gag for when a character mishears what another character says. Often sets up a Sustained Misunderstanding or Funny Phone Misunderstanding. One of the main components of Ignoring by Singing.

When Dib spots Zim walking across the street, he loudly calls his name, only to have to repeat himself multiple times as Zim can't hear what he's saying.

Alternative Title(s): Banana In My Ear

When Dib spots Zim walking across the street, he loudly calls his name, only to have to repeat himself multiple times as Zim can't hear what he's saying.