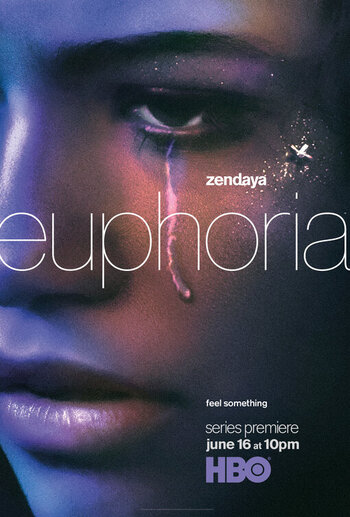 feel something
"Every time I feel good, I think it'll last forever, but it doesn't."
— Rue Bennett
Advertisement:

Euphoria is an American teen drama TV series created and written by Sam Levinson (known for Assassination Nation among other works) for HBO, made with assistance from production companies including A24. A loose remake of an Israeli television series of the same name, it stars Zendaya alongside an ensemble cast including Maude Apatow, Eric Dane, Storm Reid, Sydney Sweeney and Colman Domingo.

Born in the wake of September 11, 2001, teenager Rue Bennett (Zendaya) has spent the better part of her life chasing after a complete and total absence of feeling, culminating in a destructive lapse into drug addiction that ended up putting her in rehab. Having returned home, she now has to deal with her wary mother and friends who are alternately worried about her and incredulous that she really intends to stay clean.

When she goes back to high school, Rue enters an environment of people with varying identity-based insecurities stemming from traumatic pasts, and comments on their lives and backstories as the series' narrator. As she tries to keep her head above water, she navigates a world ruled as much by vengeance and deceit as it is love and passion, making friends and enemies along the way, and learns the disturbing lengths some will go to hide their own issues or expose those of others.

The series premiered on June 16, 2019, its first season running for eight episodes through August 4. While its graphic content was not without controversy, a second season was renewed in July. Production was slated to begin in March 2020, but the COVID-19 Pandemic caused the season to be suspended indefinitely just days before the start of filming, shifting future plans for the series.

The setbacks ultimately led to the production of two hour-long specials, both produced under pandemic guidelines, that bridge the gap between the first and second seasons. The firstnote "Trouble Don't Last Always" had a TV premiere on December 6, 2020, while the secondnote "Fuck Anyone Who's Not a Sea Blob" had a TV premiere on January 24, 2021note both episodes were released several days before these dates exclusively on HBO Max. The former centered around Rue, and the latter around the character Jules, both specials focused on catching up with their central character following the events of the first season, taking place during Christmastime.

Production for season 2 finally began in March 2021, wrapping in November of that year. The season later premiered on January 9, 2022 and ran for eight total episodes through February 27. On February 4 of that year, the series' renewal for a third season was announced.

"I'm just saying, love is a million things. Sometimes it feels good and sometimes it doesn't."