Cutting Back to Reality 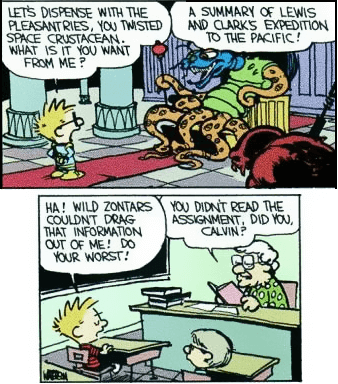 In stories featuring hallucinations, illusions, fantasies, VR, flashbacks or other unreal elements superimposed on reality, a popular means of demonstrating this to the audience is by allowing them to see these imaginary elements from the perspective of the character experiencing them, often without indicating that they are anything other than reality... and then cutting and/or transitioning to a different perspective that shows that the character is interacting with something vastly different — or in extreme cases, something that isn't there.
Advertisement:

This can be used in many different ways: sometimes the "real" perspective is simply part of the audience's point of view, with no in-story justification required; at other times, it belongs to another character who isn't privy to the unreal, and often reacting with a good deal of confusion as a result. On occasion, this may be used as part of the original character's Moment of Lucidity, or a permanent return to normality (if such a thing is possible).

Often used to illustrate Sanity Slippage or Through the Eyes of Madness; if the unreality of the situation is kept secret up until this point, the use of this trope often constitutes a Wham Shot. Can also be used, usually to more comedic effect, in combination with Inner Thoughts, Outsider Puzzlement.

Supertrope to Crashing Dreams, when this happens to dreams specifically.

Often used to show that a character is Acting Out a Daydream or is having an Indulgent Fantasy Segue. Compare Daydream Surprise and Imagine Spot, which can use this kind of cut/transition, but are by nature limited to the realms of the imagination. Compare and contrast Once More, with Clarity!, which is this trope played after the fact instead of concurrently. Contrast Invisible to Normals, a trope which can also make use of this cut under circumstance, but deals with elements that are real and not imaginary.