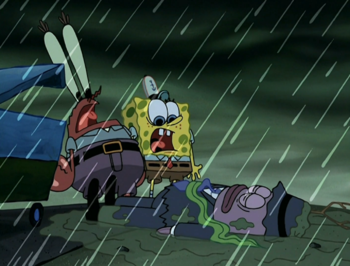 "We killed the Health Inspector!"
Advertisement:

When a health inspector comes to test the Krusty Krab, Mr. Krabs and SpongeBob comply to his demands, only to discover there's someone pretending to be a health inspector just to get free food. Thinking he's the fake inspector, the two concoct the titular "Nasty Patty" as a way to get back at him. When a fly enters the inspector's mouth as he's about to take a bite, it causes him to choke and seemingly die on the "Nasty Patty". The two celebrate, only to find out the real impostor has already been found. Now it's up to Mr. Krabs and SpongeBob to hide the body, but things go From Bad to Worse when two police officers show up. 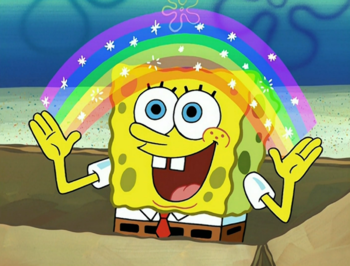 SpongeBob and Patrick order a big-screen TV just so they can play in the box it came in, much to Squidward's confusion. At first he ignores them, but slowly but surely becomes interested when their imaaaaaginaaatiooooon comes into effect.