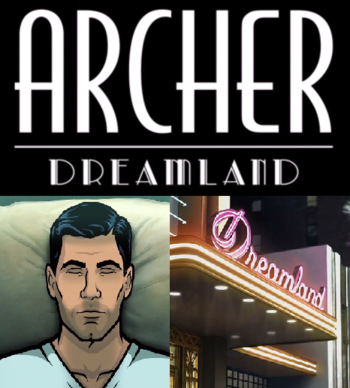 Does "Dreamland" refer to the nightclub or the Adventures in Comaland? Yes.
"A game name like Just Cause is absolute gold for the reviewer, since it can mean both '(a) just cause', a righteous agenda, or the phrase 'just (be)cause', a dismissive explanation of whimsical or reckless behavior. The opportunity for puns is obvious: why would you steal a passenger jet and fly it directly up the bumhole of a sun-bathing prostitute? Just 'cause! Praise and large quantities of gamer pussy will swiftly follow."
— Yahtzee, Zero Punctuation
Advertisement:

Some works have titles with multiple meanings that all refer to the content of the work in different and independent ways. The authors are probably very proud of themselves.

They are often hard or impossible to translate literally to another language, so translations will frequently use a Completely Different Title.