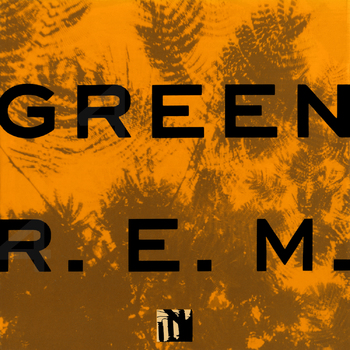 "We are agents of the free."
Advertisement:

Green, released in 1988, is the sixth studio album by American Alternative Rock band R.E.M.. The album was their first to be released through Warner (Bros.) Records, onto whom the band signed out of dissatisfaction towards the dismal international distribution of their work by their previous label, I.R.S. Records; while other labels offered the band more money, only Warner Bros. guaranteed total creative freedom, which R.E.M. adamantly prioritized.

Regarding the album itself, the sound continues the shift to more commercially-accessible music, albeit throwing in a more self-aware and sarcastic angle towards it, and refines the harder style first developed on Document. The mood is overall dour and the lyrics emphasize both sociopolitical and environmental themes; fitting this, the album was released directly to coincide with Election Day 1988, with the band using their increased profile to criticize Republican candidate George H. W. Bush while endorsing Democratic candidate Michael Dukakis (who would ultimately lose to Bush, souring the band's spirits, as later depicted on their 1992 song "Ignoreland").

The album was again produced by Scott Litt and was recorded at Ardent Studios in Memphis, which was the home of one of their major influences, Big Star.

Green was a commercial success, peaking at No. 12 on the Billboard charts. The single "Stand" additionally became R.E.M.'s second top-10 hit, peaking at No. 6 on the Billboard 100 and receiving a parody by "Weird Al" Yankovic in the form of "Spam". The album's success was bolstered by an elaborate 11-month world tour throughout 1989; a Concert Film from the tour, aptly titled Tourfilm, would release on Warner Reprise Video in 1990.

TROPE! In the place where you live: