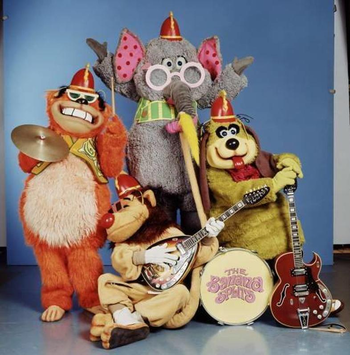 "Tra-la-la, la-la-la-la! (x4)
One banana, two banana, three banana, four!
Four bananas make a bunch, and so do many more!
Over hill and highway the Banana Buggies go,
Coming on to bring you the Banana Splits show!"
Advertisement:

The foursome did comedy sketches, performed songs and introduced the following action segments:

After the Banana Splits became popular, Hanna-Barbera tried to duplicate its success in 1977: Skatebirds on CBS. (Some sources had 1969's The Cattanooga Cats on ABC as live/animated with the Cats in live costumes, but it was all animated.) When The Banana Splits was shown in broadcast syndication, and later on TBS, the following series were added to the package:

Finally, a short-lived revival of the series aired on Cartoon Network in 2008, featuring Bill Farmer, Frank Welker, and Carlos Alazraqui as Fleagle, Bingo, and Drooper respectively.

The series was revived in 2019... as a horror film, with Eric Bauza as Fleagle, Bingo, and Drooper. The Splits also appear in Jellystone!.

Interesting trivia: The Banana Splits title song (or rather, a high-speed Cover Version by The Dickies) puts in an appearance as Hit Girl's theme music in Kick-Ass.

The Banana Splits provides examples of: