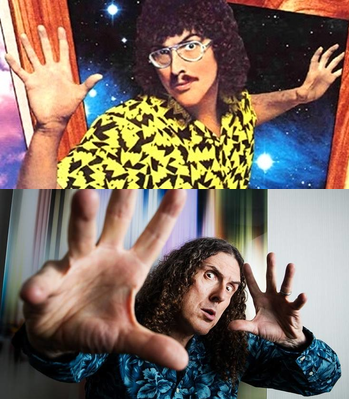 Daring to be stupid since the '80s!note Above: His original appearance from his debut album till Bad Hair Day. Below: His current appearance, starting from Running With Scissors.
"He who is tired of Weird Al is tired of life."
— Homer Simpson, The Simpsons, "That 90s Show"
Advertisement:

Sometime in 1966, a door-to-door salesman stopped by the Yankovic household offering either guitar or accordion lessons; according to Al, his parents figured that "the world needed one more accordion-playing Yankovic" (the first being polka legend Frankie Yankovic, to whom Al is not related) and young Alfred received his first lesson the day before his seventh birthday. As a teenager, he became a fan of Los Angeles-based radio host Dr. Demento, known for playing wacky novelty songs. Al began recording his own humorous songs in his bedroom with his accordion and mailing them to the good Doctor, who played them on the air; according to Al, Demento appreciated the novelty of a geeky teenager with an accordion thinking he was "cool". Al's first songs included "Belvedere Cruising" (an original ode to his family's car, a 1964 Plymouth Belvedere) and "Dr. D Superstar", a parody of "Jesus Christ Superstar" rewritten to be about Dr. Demento.

When Al went to Cal Poly San Luis Obispo to earn an architecture degree, he began performing his songs at the campus coffeehouse and worked for the school's radio station as a disc jockey, where he picked up the nickname "Weird Al". Sometime before he was kicked off the station for refusing to follow various airplay rules, he went across the hall into the men's bathroom with his accordion and recorded a parody of The Knack's "My Sharona" entitled "My Bologna", which became one of the most popular songs on The Dr. Demento Show in the following weeks. Knack frontman Doug Fieger turned out to be a fan of "My Bologna", and got the song released as a single on Capitol Records under a short-term contract.

Al scored another minor hit in 1980 with "Another One Rides the Bus" (a parody of Queen's "Another One Bites the Dust") and decided to pursue a career in music, feeling architecture wasn't really his calling. After a modest start (including a disastrous gig opening for Missing Persons), Al and his band released his first album on Scotti Bros. Records in 1983, hit it big with his second album thanks to "Eat It" (a song and music video parody of Michael Jackson's "Beat It") peaking at number 12 on the Billboard Hot 100, and hasn't looked back since. Most of Al's albums during the '80s and '90s went platinum; Al shrewdly used Viral Marketing to saturate social media with publicity for his 2014 album Mandatory Fun, and he was rewarded with that album debuting at number one on the Billboard 200 (his first number one album ever). The success of Mandatory Fun launched an online petition asking for Al to play the Super Bowl XLIX halftime show, which eventually gathered over 125,000 signatures. note Despite this, Al would be the first to admit he was never seriously in the running due to behind-the-scenes politics; the gig eventually went to Katy Perry. Al has also won five Grammys in his career: three for various albums, one for a video, and one for his 2017 collector's boxset Squeeze Box: The Complete Works of "Weird Al" Yankovic.

In 1989, Weird Al starred in the film UHF, and he had a short-lived CBS "kids' show" in the 1990s, The Weird Al Show. He has been involved with the Transformers franchise twice: his song "Dare To Be Stupid" was played in the 1986 movie, and he provided the voice of Wreck-Gar in Transformers: Animated. His voice has appeared both before and since the latter in a number of cartoons, with his roles ranging from one-off gag characters to the title characters of the Animal Man Animated Adaptation and the Disney XD cartoon Milo Murphy's Law. He's also written two children's books, When I Grow Up and My New Teacher and Me.

In 2017, it was confirmed that Al would be getting a star on the Hollywood Walk of Fame. He was awarded his star on the 27th of August 2018.

2022 started off weird with a pair of unexpected "Weird Al" news. First came the news that a comedic autobiography of Al was in production. With a script written by Eric Appel and Weird Al himself, Weird: The Al Yankovic Story stars Daniel Radcliffe as Al, for eventual release on the Roku platform. A month later, Multimorphic announced the release of Weird Al's Museum of Natural Hilarity, a Licensed Pinball Table based on Al's works.

Prior to the release of Mandatory Fun, Al usually released a new album and went on tour once every three to four years, which led John Garabedian of Open House Party to say that "every album is [Al's] comeback album, and then he goes away until the next one". With the release of Mandatory Fun, Al fulfilled his record contract, and he now plans to go with completely digital releases in the future, which gives him the opportunity to release new songs as they're completed instead of waiting until he has enough material for a full album.

Unlike other parody-centric artists, Al and his band (who have been together since the 80s) from the second album on — the first album used accordion on every track, in keeping with Al's trademark talent — stay extremely close to the original melodies and instrumentation of the song they parody. In the most extreme example of this attention to detail, "Trapped in the Drive-Thru" (based on R. Kelly's "Trapped in the Closet") sounds exactly like the original. Al is very sympathetic to geek communities and frequently gives them recognition in his songs.

The popularity of his work eventually created Parody Displacement, and his habit of using pop culture metaphors (AKA "Pulling a Weird Al") led to his being the former trope namer for that.

In the early days of filesharing (LimeWire especially), a lot of comedy/parody songs were falsely attributed to Al. The Not Al List

was created to catalog these songs and give them the proper attribution. Lots of these songs contain raunchy or offensive lyrics, and the lead vocal vaguely sounds like Al; since Al is the most visible parody musician alive, his name gets attached to them, despite having subject matter and lyrics he would never touch. Even with the occasional dip into raunchy subtext, he still aims to be (in his words) a "more-or-less family-friendly" performer.

The best way to tell if Al performed a given song is to look for music videos of them on YouTube. Take your heart medication first — wouldn't want to Die Laughing.