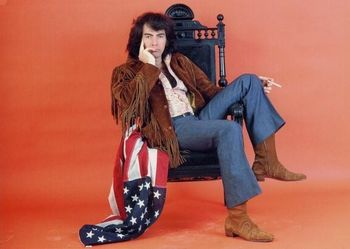 Diamond in his 1970s heyday.
"What a beautiful noise
Coming into my room
And it's waiting for me
Just to give it a tune."
— "Beautiful Noise"
Advertisement:

Neil Leslie Diamond (born January 24, 1941) made his debut as a Singer-Songwriter in the mid-Sixties, with such hits as "Cherry Cherry", "Girl, You'll Be a Woman Soon", and "Sweet Caroline". Diamond also had a massive hit with 1972 concert album Hot August Night. He has revived his career many times, starting with the successful soundtrack album from the failed movie Jonathan Livingston Seagull. The momentum that had run out by the beginning of The '80s was given new force with the song "Heartlight", which was rejected from the soundtrack of the movie E.T. the Extra-Terrestrial but was accepted by millions of fans.

Diamond faded a bit in The '90s but still has a following.

"They're troping to America, today":