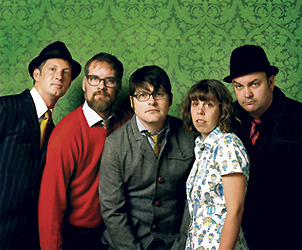 Left to right: Nate Query, John Moen, Colin Meloy, Jenny Conlee, and Chris Funk.
We are two mariners,
Our ships' sole survivors,
In this belly of a whale
Its ribs are ceiling beams
Its guts are carpeting
I guess we have some time to kill
— "The Mariner's Revenge Song"
Advertisement:

Most bands write songs about How Much I Love You Babe, songs that go verse-verse-chorus-verse-chorus with nice regular chord structures, maybe throw in a neat guitar solo in the middle and a fade-out ending, you know, something like that.

Most bands are not the Decemberists.

Colin Meloy, Chris Funk, Jenny Conlee, Nate Query, and John Moen form the band's current rotation, with Meloy, Funk and Conlee being the only original members remaining in the band (the band's best known former member is drummer/vocalist Rachel Blumberg who was a member of the band between Her Majesty and Picaresque). The songs, penned and sung by Meloy, vary from quirky, introspective pop about filicide to rollicking ballads about pirates and gypsies. (There is a disproportionate amount of drowning.) Meloy often employs the narrative form, creating baroque tales from the perspective of lovers, soldiers, and sailors.

As of 2011, Colin Meloy has added novel writer to his list of accomplishments, having written the young adult novel WILDWOOD and its sequels, Under WILDWOOD and WILDWOOD Imperium. In February 2017, Colin announced a new book tilted The Whiz Mob and the Grenadine Kid set to be released October the same year. The band also appeared live with Wilco and Letters to Cleo in the sixth season finale of Parks and Recreation. The band also performed the first of ''The Hamildrops," "Ben Franklin's Song," which was released in December 2017.