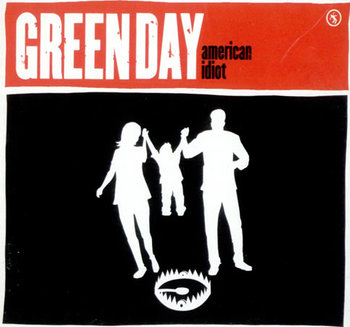 They're not one for subtlety.
"To fan the flames of discontent."
— The motto of the Little Red Song Book since 1909.
Advertisement:

A piece of music, normally written about a political subject and intended to drive home some message. Quite often Anvilicious, not that there's anything wrong with that. Since they are also used to educate people, unite them in the cause, and should be easy to learn, they are often prime candidates for a rousing Crowd Song or an Audience Participation Song.

Name a recording artist from between 1964 and 1978. Chances are he, she, or they have at least one protest song, and it's a folk song about the Vietnam War. More recently, common subjects include racism (especially police brutality, racism, and profiling, which has created its own subtrope, the Anti-Police Song), the Iraq War, corruption, censorship, environmental issues, and big governments controlling lives. Lyrical Dissonance often arises when a director fails to appreciate that a sufficiently-subtle protest song is not in fact the upbeat anthem he believes it to be. Or sometimes it's entirely intentional on the part of the writer. If the song is in protest of a job, than it's a Working Class Anthem.

This sort of music is at least Older Than Steam, and may well be older still. Often prone to becoming Unintentional Period Pieces.

Compare Hail to the Thief, which can sound similar but is used to emphasize setting instead of making a direct political point. Not to be confused with Music Is Politics, which is about the music industry politics that have to be navigated for an album to be produced.