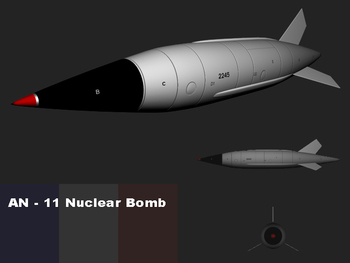 "I truly believe that one does not light-heartedly attack people who are able to kill 80 million Russians, even if one can kill 800 million French, that is if there were 800 million French."
— Charles de Gaulle
Advertisement:

France tested its first nuclear weapon in 1960. It conducted nuclear tests for longer than most other nations, up until 1996.

Deciding to go it alone, without US help, meant some technologies arrived rather later than others. Traditionally, the nuclear launch codes are the last thing a departing president gives the new one (it's important enough to the French that any media report of the change in leadership will mention "giving the codes").

Knowing that Western Europe could probably not stand against a full Soviet attack, France's nuclear policy, as developed by De Gaulle, was that if it was to fall, so would the invader. In that regard, France was probably the nation the most prone to use massive retaliation, and be the first one to bring the nukes on - even if it meant global escalation. The policy included bombing conventional Soviet armies who would cross Germany (much to the anger of West Germans during interarmy exercises), which was as much defence as a last warning: next would be Soviet cities.

This policy has not really changed, it is simply that there seems to be no foe both hostile and strong enough that it would be needed. So while the number of nukes France possess has recently been halved for budgetary reasons, the remaining ones continue to be maintained and modernized, just in case, thus making this trope another Real Life aversion of Cheese-Eating Surrender Monkeys.

Perhaps, one could say, the ultimate aversion to that trope.

Boomers and Their Missiles

A conventionally powered test platform for SLBM development, test-firing first the M1 and then the M4. Carried four missiles, and was retired in 1986.

The M-20 was a two-stage, solid propellant, intermediate-range ballistic missile, 10.4 m in length and 1.5 m in diameter. Launch weight was 20,000 kg and the missile had a range of 3,000 km. Guidance was inertial. The payload was believed to include some penetration aids and the single re-entry vehicle had some hardening against nuclear effects. The TN-60 warhead was reported to yield 1.2 Mt.

A larger three-stage missile replacing the obsolescent M20 on the Redoutable class. Carried 6 150-KT warheads in MIR Vs along with the expected increase in accuracy, it also had double the range of its predecessor.

The second generation of French SSBNs, the first unit entered service in the mid-90s armed with the M45 missile. The fourth and last one, currently undergoing trials, is the first to be equipped with the much improved M51 rocket. The Triomphant was a quantum leap in terms of discretion (shrouded pump-jet propeller, suspended machinery, advanced signature management) and the coming Barracuda-class SSNs will build on this technical legacy.

Derived from the M4, it brings longer range while being of similar size and payload. Equips the Triomphant class, and is starting to be replaced by the M51.

A compromise from the much larger and longer-ranged (and much more expensive) M5, it has a further range boost on the M45 and can carry up to ten warheads.

Since the last diesel-electric subs (of the Agosta class) were retired in the 90s, the French Navy only operates SSNs of the Rubis-Amethyste class (although modern SSKs are offered for export, like the commercially successful Scorpene). Those are famous for being the smallest SSNs in the world. The whole class was upgraded to the Amethyste standard. The first unit of the successor Barracudas is currently under construction.

These two carriers served from 1961 to 2000, a career that involved support in Kosovo, patrols off Lebanon and apparently two F-8 Crusaders accidentally starting a dogfight in 1977 with South Yemeni MiG-21s in a case of mistaken identity that was resolved before anyone launched weapons.

Foch was sold on to Brazil, where it remains in service as NAe São Paulo. Clemenceau is currently being scrapped in Hartlepool after India and Egypt rejected the ship as too toxic.

A nuclear-powered aircraft carrier, entering service in 1999. Has suffered from considerable technical issues, chiefly faulty propellers. Was engaged in Afghanistan operations where its Super Etendards and Rafales were used to bomb Taliban positions in support of coalition forces.

A new conventionally-powered carrier previously under development that was basically a catapult-equipped version of the UK's Queen Elizabeth class. Officially cancelled as of 2013 under that year's White Paper

, along with numerous other cuts.

France withdrew all its land-based ballistic missiles in 1999.

Their early ballistic missiles would become the basis of the European Space Agency's original Ariane 1 rocket, first launched in 1979. It bears no resemblance to the modern Ariane 5 rocket.

The S3 is a two-stage, solid-propellant Intermediate Range Ballistic Missile (IRBM). The first stage was inherited from the S2, with a P16 solid fuel engine and 4 exhaust nozzles.

The first stage carries 16,940 kg (37,350 lb) of fuel and burns for 72 seconds. The second stage carries 6,015 kg (13,261 lb) and burns for 58 seconds. The nuclear warhead, a single 1.2 Mt TN 61, is hardened and carries penetration aids,(although it soon became obsolescent due to its limited range as well as improvements in ABM technology on the soviet side). A land based M45 was considered but vulnerability and lack of flexibility of the missiles killed off the land based missiles in France.

A carrier-based subsonic strike fighter, similar in concept to the A-7 Corsair II, but far less ugly. Now retired, these planes were famously used in the anti-ship role by both Argentina and Iraq.

The Mirage IV was a strategic high-performance bomber; it resembled an enlarged version of the famous Mirage III. Both were produced by the same manufacturer, Dassault (the nom de guerre of the earlier French Resistance fighter, brother to the one who founded the company). It was designed to strike targets in the European part of the USSR. Initially, it was supposed to go in very high and fast; later, as Soviet air defenses improved, the strategy shifted to low-level high-speed penetration and heavy use of stand-off weapons (even then the aircraft was at risk from more advanced interceptors and missiles). It was the first French nuclear delivery system and for a couple of decades, it was the mainstay of their nuclear forces. The Mirage IV was also used as a recon plaform, in an SR71-lite way. For instance it was used in the Balkans operations in the late 90s, undertaking high altitude and high-speed (Mach 2) recon runs.

A nuclear-strike version of the 1980s-vintage Mirage 2000, very close to the ground strike-oriented 2000B bit with the dedicated and sensitive components needed for the nuclear mission.

The newest French multi-role aircraft, replacing several other types. France was originally involved in the European Fighter Aircraft (EFA) program that would eventually create the Eurofighter Typhoon, but pulled out over fundamental disagreements, i.e. wanting a carrier version while everyone else didn't and wanting a multi-role fighter when everybody else wanted an air-superiority fighter to complement the Tornado which the French didn't have.

This aircraft has carrier and land-based versions, with only the air force having both one and two-seater sub-versions, the navy only having a single-seater (only the two-seaters carry nukes). Has seen combat in Afghanistan (the only 4.5 gen fighter to have yet done so, not counting the Super Hornet) and being marketed for export, with Egypt and India as customers and Brazil, Libya and the UAE seriously interested.

Air-Sol Moyennne Portée (Medium-range air-to-surface), a stand-off cruise missile designed as a final warning shot before going ballistic. Currently superseded by the ASMP-A (Amélioré - Improved). The ASMP-A is a stealthy ramjet-propelled missile, only general performance claims were given owing the the very sensitive nature of the nuclear deterrent.

Others (The vague, fictional etc.)