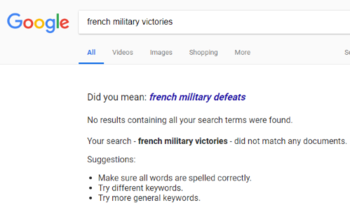 Admit it, you actually went and did a search, didn't you?
"Our foes, the French, it is said, are better lovers than they are fighters. This is true lads, ask any goat, pig or other farmyard animal."
— English General, Medieval 2 Total War
Advertisement:

The Anglophone stereotype that France sucks at war and surrenders at the drop of a hat... and needs the Anglophone countries to save them!

It is unknown when exactly this stereotype first arose. France was England's, and later the United Kingdom's, oldest and most frequent enemy, which certainly contributed to a negative view of the French in general in the Anglosphere from the Middle Ages onwards. The term itself was coined by writer Ken Keeler on an episode of The Simpsons in 1995. This trope is also so widespread because it jibes with that other major negative stereotype Anglophones have about the French — that they're effeminate.

Generally speaking, the concept that contributes to the perception of this trope was how swiftly France was overrun by German forces in World War II, and from the 1940s to the 1970s were subject to several disasters in their military campaigns, losing large colonial wars in Indochina (to a much weaker force than the Americans faced years later) and Algeria, as well as being strong-armed into withdrawing from Egypt. Of course, the truth is always more complicated. Historically, France has been the prominent battleground of just about every major European war, and they lost more men in combat during World War I than any other nation except Russia and Germany, while being the strongest Allied army for most of it. And then, of course, there's the Revolutionary and Napoleonic period — from the 1790s to 1815, France became a military powerhouse, culminating in the French Empire, under a certain Napoléon Bonaparte, controlling a large swathe of Western Europe and turning Italy and Spain into client states, requiring everyone else in Europe

to team up to have a chance of beating them. The idea of France always surrendering might even be Newer Than They Think, perhaps only beginning with how quick they surrendered to Nazi Germany during World War II.

It shot back to prominence particularly in the US in 2003 when France refused to support the invasion of Iraq. While many other major nations also voted against it, France for whatever reason came in for a particularly acidic response from American conservatives.

Begging you not to hit his jaw (his weak spot) and complaining that his gloves are too tight; all Joe's missing is the "surrender" part and he'd be the Trope Codifier.

Begging you not to hit his jaw (his weak spot) and complaining that his gloves are too tight; all Joe's missing is the "surrender" part and he'd be the Trope Codifier.