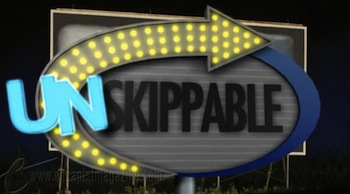 Unskippable was a weekly web series hosted on The Escapist, that ran from November 19, 2008 to March 30, 2015. Graham and Paul snark over the opening cutscenes of various video games, in a style inspired by Mystery Science Theater 3000.

The show was born as part of the Escapist Film Festival, where its pilot episode garnered enough votes to become a regular feature. It proved successful with the site's audience (who liked a bit of game humor).

Cutscenes are chosen based on several factors (and yes, they can be skippable). Terrible writing, poor pacing, and Cliche Storms are a plus, but even great cinematics can get the Unskippable treatment if the duo can think of enough silly things to say about them.

In 2009, Unskippable finally took on Hideo Kojima, the king of overwrought cutscenes, with Metal Gear August, a satirical look at Guns of the Patriots. As expected, the game was so cutscene-heavy that it took them 5 episodes to get through an amount equivalent to most of the other games they review.

The episodes can be found here.

A wiki page covering the Unskippable series can be found here.

In 2015, after six years of episodes, Graham and Paul ended the series along with their departure from The Escapist, for reasons that are best gotten from the horse's mouth.

Their final episode covered Metal Wolf Chaos as a send-off to the show. Graham and Paul can still be seen in their other shows.

The snarkers in question, Graham Stark and Paul Sanders, are also the creators of LoadingReadyRun. They have also experimented with a live Let's Play, found here.

A Spiritual Successor to the show separate from the Escapist began in 2017; Running Start

is a blend of Unskippable and the aforementioned Graham & Paul Let's Play. The two snarkers once again tackle the beginnings of games in their usual style, with two main changes: first, in addition to the intro cutscenes, they also go through the first ~20 minutes of actual gameplay to see what else astounds them. Second, they lean more towards games that they have little to no experience with, resulting in unscripted commentary without losing the Unskippable flavor.