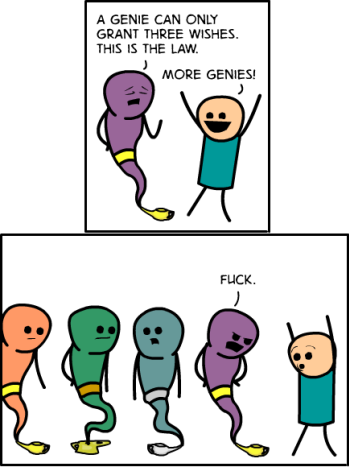 That's one way to spin 'wishful thinking'.
Corey: Last one! Better make it count.
Trina: I wish for a million wishes!
Cletus: [spits] There ya go.
Corey: What? You can wish for more wishes?
Bessy: Sure. That's one wish. I don't know why everybody doesn't dooooo that.
— Grojband, "Wish Upon a Jug"
Advertisement:

When a character is owed a limited number of wishes (usually one or three) by a genie or other wish-granting entity, the first thing many of them try to do is apply a bit of Loophole Abuse by using one of their wishes to bypass the numerical limitation. Of course, it's rarely that simple; the savvy genie will have an Obvious Rule Patch already in place to cover such a wish, and some will even declare it up front to save time. A Jackass Genie might even punish the wisher for trying this. Not that any of that necessarily stops particularly persistent, Rules Lawyer-y, or wily characters from continuing to probe for loopholes (such as using one wish to develop a way to locate other genie lamps and another wish for a means to develop teleportation, allowing the user to gain access to other genie lamps around the world).

If the restriction is not by the genie's choice, Freeing the Genie can sometimes allow them to continue helping the character beyond the otherwise-allowed number of wishes... as long as they can be trusted to keep their end of the bargain after being freed and don't lose their power as part of the wish.

Of course, they never said you couldn't wish for more genies...

And also, just because you can wish to have more wishes, doesn't mean the genie will grant those extra wishes.

A Sub-Trope of Loophole Abuse. It can also count as a Story-Breaker Power if used frequently.

Thanks to both of them wanting revenge on Timmy, Norm allows Crocker to wish for more wishes. He admits that genies actually can grant wishes for more wishes, they usually just don't want to.

Thanks to both of them wanting revenge on Timmy, Norm allows Crocker to wish for more wishes. He admits that genies actually can grant wishes for more wishes, they usually just don't want to.