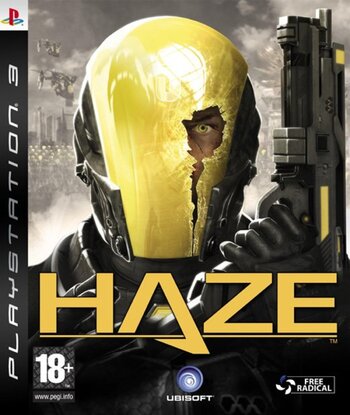 He already looks pretty bad but he's even worse!
Advertisement:

A 2007 First-Person Shooter with a storyline akin to The War on Terror, about a bunch of drugged-up macho frat boys with assault rifles and glowing neon armor sent into the jungle to hunt stereotypical South American guerilla types, unfortunately with a lot of Executive Meddling.

Initially planned to be a key multi-platform title, Haze suddenly narrowed to the PlayStation 3 alone and was briefly built up as the PS3's Halo-killer. Marketed as a hard-hitting Deconstruction of modern shooters, the game was initially quite hyped. Upon release, critics quickly declared it to be an average shooter with mediocre gameplay and graphics, combined with over-the-top voice acting and dialogue. The critical pummeling it got on release and its devastatingly low sales made it a disaster for its creators. Free Radical went into financial administration within months of the game's release and was later acquired by Crytek, thus becoming Crytek UK, before finally closing their doors in 2014.

Haze focuses around the soldiers of Private Military Contractor / Megacorporation Mantel Industies, and their battle to "liberate" an unnamed South American country from the guerrilla forces of the Promise Hand, led by Gabriel "Skincoat" Merino. Mantel doses its soldiers with the performance-enhancing drug "Nectar".

Of course, it quickly becomes apparent that Mantel's troops are immature, testosterone-driven man-children to whom war is a big video game, and Mantel itself is an evil corporation whose supposed humanitarian reasons for intervening in the country are merely propaganda to cover up their real motives for storming in and killing the indigenous folks. And Merino turns out to be saintly old man who, despite what Mantel propaganda claims, does not, in fact, eat people or wear their skins. The player character, Mantel trooper Shane Carpenter, eventually defects from Mantel to the Promise Hand, trading his Nectar-enhanced Power Armor for guerrilla-style tactics such as playing dead, disarming enemies with melee attacks, and using Nectar knives and Nectar grenades to overdose enemy soldiers and cause them to go berserk.

For a more successful Deconstruction of military FPSs, see Spec Ops: The Line.