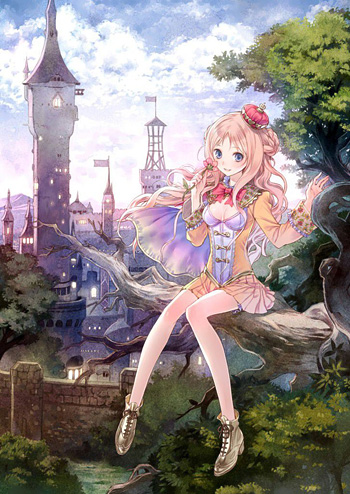 And now, the story continues with a princess from a frontier kingdom, Atelier Meruru: The Apprentice of Arland
—Prologue
Advertisement:

Atelier Meruru is the third game of the Arland series of Atelier games on the PlayStation 3, released in 2011 in Japan and America in 2012. It is a direct sequel to Atelier Rorona: The Alchemist of Arland and Atelier Totori: The Adventurer of Arland before it, and (like many an Atelier game), can be described as one-part JRPG, one-part Time Management Game and three-parts Item Crafting with a dollop of Moe for flavour.

Merurulince Rede Arls (just call her "Meruru") is the Rebellious Princess of Arls, a small kingdom located in the north of the Arland Republic. Bored with palace life, she impulsively decides to become an alchemist under the tutelage of Totooria Helmold, the main character of Atelier Totori. This does not sit well with her father and royal retainer, so they propose a deal: if Meruru can prove that her interest in alchemy is not just a passing fad by improving her skills and using them to develop Arls into a thriving kingdom over three years, then she will be permitted to complete her training.

An Updated Re-release of the game titled Atelier Meruru Plus: The Alchemist of Arland 3 for PlayStation Vita released March 20, 2013 in Japan, with Regular and Premium editions available. The regular version was also released internationally on PSN in October 2013. Another rerelease, Atelier Meruru DX, was released on September 20, 2018 in Japan and December 4, 2018 in North America as part of the Atelier Arland Series Deluxe Pack for PlayStation 4, Nintendo Switch, and Steam. It is followed by Atelier Lulua: The Scion of Arland, released in 2019.